Is Modafinil Neurotoxic? A Detailed report

There’s no doubt that modafinil and the newer Armodafinil does what it’s supposed to do (promote wakefulness and vigilance). But what are the long-term effects of modafinil on your brain? A small boost in productivity probably isn’t worth burning the candle at both ends.

Note: For those lazy people who are worried and won’t read on – evidence favors the idea that modafinil is not neurotoxic but rather protects neurons (particularly dopaminergic neurons).

If you haven’t investigated the topic yourself, your gut reaction might be that modafinil could be like Adderall: potentially neurotoxic at high doses. This was my initial thought when asked this question. 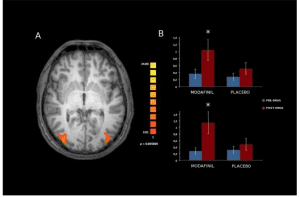 If you’re unfamiliar, neurotoxicity is an umbrella term for damage to the nervous system. Drugs, radiation, trauma, severe and chronic stress are examples of things that can be neurotoxic.

You’ll probably be quick to point out that modafinil is a relatively weak dopamine reuptake inhibitor (DRI). This means that modafinil is unlikely to have a huge impact on dopamine. If you’re unfamiliar, excessive dopamine outside the cell forms 6-hydroxydopamine (6-OHDA), which can damage dopaminergic neurons. Even so, modafinil’s usefulness for ADHD suggests some dopaminergic effect. 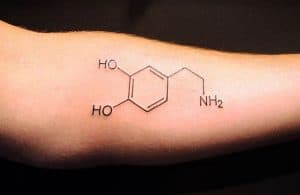 So modafinil doesn’t affect the neurotransmitter dopamine to the same extent that Adderall does. Adderall dumps the dopamine that’s neatly stored in vesicles right into the synapse.

For many years, modafinil’s mechanism of action remained elusive. But some scientists are beginning to piece together a coherent narrative about how modafinil works.

The consensus seems to be that modafinil affects many neural circuits and neurotransmitters. These include catecholamines like dopamine, orexin/hypocretin, histamine, glutamate, GABA, and even gap junctions. For more about gap junctions, check out: Gin and juice: modafinil tightens up the drinker’s brain at rest (https://www.ncbi.nlm.nih.gov/pubmed/23540352). 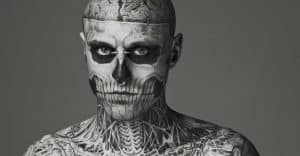 Modafinil tends to increase glutamate and decrease GABA. (Glutamate is the major excitatory neurotransmitter in the brain. GABA has the opposite effect, dampening neural activity.)

Modafinil’s “two-punch” mechanism, whereby GABA is decreased and glutamate increased may overstimulate neurons. When neurons are overstimulated by glutamate, NMDA-type glutamate receptors stay open longer than they should. Too much calcium rushes in through the pore of the receptor, wreaking all kinds of havoc. Excess calcium inside cells triggers cell death by apoptosis or necrosis. 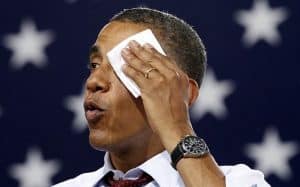 So far, these are theoretical considerations. What’s the actual evidence that modafinil decreases GABA and increases glutamate?

In one review of modafinil’s mechanism, you can find the following:

“…Modafinil does not appear to have much effect on GABA in the thalamus or hippocampus, but GABA levels were reduced by modafinil in most brain regions studied: the cortex, medial pre-optic area of the hypothalamus, posterior hypothalamus, nucleus accumbens, pallidum, and striatum…”

As the review notes, the effect of modafinil on glutamate is a mixed bag. But to summarize:

(1) modafinil reduced GABA in most of the brain regions studied,

(2) increased glutamate in medial preoptic and posterior hypothalamus, thalamus, and hippocampus, while,

(3) glutamate in the substantia nigra, striatum and pallidum was unaffected. 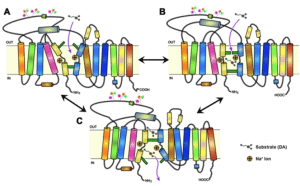 Depiction of modafinil’s unconventional interaction with the dopamine transporter 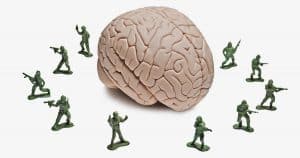 So Modafinil’s neurotoxicity seems to be empty speculation. However, there’s does seem to be some evidence that Modafinil is actually neuroprotective (i.e. protects the brain from insult and injury).

A study in the 1990’s reported that modafinil increased the cortical pool of creatine and phosphocreatine. This is a good thing. Phosphocreatine is a high energy compound that can replenish ATP by phosphorylating ADP. (Effects of a vigilance-enhancing drug, modafinil, on rat brain metabolism: a 2D COSY 1H-NMR study.)

Antonelli tested the idea that modafinil might protect neurons from being ravaged by glutamate. Modafinil wasn’t as effective as glutamate antagonists (e.g. Memantine aka Nameda) at protecting neurons. But it did prevent the reduction in GABA release observed in cells exposed to glutamate. (Modafinil prevents glutamate cytotoxicity in cultured cortical neurons.)

On a side note, MPTP was discovered accidentally when an organic chemistry PhD candidate, Barry Kidston, was synthesizing an illicit drug. I’ll let Wikipedia tell the full story ( https://en.wikipedia.org/wiki/MPTP):

“The neurotoxicity of MPTP was hinted at in 1976 after Barry Kidston, a 23-year-old chemistry graduate student in Maryland, US, synthesized MPPP with MPTP as a major impurity, and self-injected the result. Within three days he began exhibiting symptoms of Parkinson’s disease. The National Institute of Mental Health found traces of MPTP and other pethidine analogs in his lab. They tested the substances on rats, but due to rodents’ tolerance for this type of neurotoxin nothing was observed. Kidston’s Parkinsonism was treated with levodopa but he died 18 months later from a cocaine overdose. Upon autopsy, destruction of dopaminergic neurons in the substantia nigra was discovered.”

Another group (Xiao et al [2004]) also looked at the effect of modafinil on MPTP treated animals. They performed post-mortem examinations on rodent brain. Xiao’s group reported that modafinil reduced GABA, increased reduced glutathione in MPTP damaged neurons, and reduced levels of malodialdehyde (a lipid peroxidation product). What does this mean exactly? Since the state of glutathione is a biomarker for the antioxidant status of the cell, the idea is that modafinil treatment prevents oxidative damage.

Neuroprotection & Wakefulness – are they linked?

In Gerrard and Malcolm’s review of modafinil, they ask whether modafinil’s neuroprotective effects may be related to what the drug is known for: wakefulness and vigilance enhancement.

The authors develop some interesting ideas in the paper. Namely, that modafinil increases the phosphocreatine pool by directly affecting antioxidant enzymes and decreasing free radical production. Reactive oxygen species (ROS) feedback on ATP production, so that the accumulation of ROS inhibits ATP synthesis. That means if modafinil decreases ROS (because it’s an antioxidant), it could increase ATP synthesis, reducing the need for sleep. It’s the breakdown of ATP into metabolites that signals energy depletion and makes us sleepy at the end of the day. The reviewers also propose the following:

“Modafinil may enhance cytochrome c’s ability to accept and donate electrons by allosteric modification or a catalytic mechanism. Such a mechanism would directly reduce net hydrogen peroxide levels and superoxide production and increase ATP production. The ability to accept electrons from superoxide at complex I would provide a direct mechanism for modafinil’s ability to reduce MPTP-induced neuron death, which appears to be mediated by promoting superoxide production in complex I and inhibiting its normal activity. This mechanism would also involve reduced activity of the inhibitory KATP-channels that suppress neurotransmitter release and thereby account for increased neurotransmitter release.”

These are interesting ideas, but my opinion runs contrary to them. It seems much more likely that modafinil’s neuroprotective effects are independent of wakefulness enhancement. In my view, modafinil increases wake via its effects on neurotransmitters like catecholamines, histamine, and orexin.

At a glance, there is some tenuous links suggesting modafinil could be neurotoxic because it increases glutamate and decreases GABA. (This is a bit of an oversimplification since alterations in these neurotransmitters are brain-region specific. But the statement still reflects the general trend.) I wanted to share with you this evidence that modafinil may actually be neuroprotective. The idea of a substance that is both neuroprotective and has stimulant-like effects is too good to pass up.